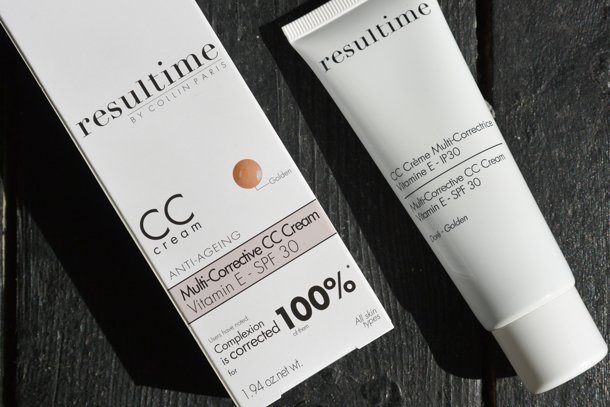 Since Resultime by Collin’s {Multi-Corrective CC Cream} went live on Cult Beauty four months ago, it has already garnered eight ‘5 star’ reviews – and I’m about to add my own gushing praise to its list of illustrious accolades. One reviewer has already whacked this skin perfecting wonder on her ‘desert island wish list’, while another has named it ‘the best CC cream [she’s] tried’ – pretty impressive, no?

So, what’s the story (morning glory)? Well, being determinedly pasty-of-face, it’s pretty fair to say I ROFLed (#truefact) when handed a sample of ‘Golden’ to trial – a shade which at first glance, looks approximately fifty shades darker than my alabaster visage. However, this CC cream is cray – just the tiniest dot (and I’m talking like, grain-of-rice tiny) buffed into skin with some sort of ‘buffy’ brush (the flattened end of Studio 10’s {Double Ended Face Brush} is my bag), completely transforms the appearance of skin; blurring and unifying and glow-bestowing unlike any other CC Cream I’ve tested… and I’ve had my fair share of foundation affairs.

The somewhat scary shade blends beautifully (there’s definitely some shade-adaptive magic happening) – warming my face up a treat so I look ‘well’ instead of ‘default wan’ – and my usual blotchiness is all but banished, thanks to Collin’s cunning colour theory.

What else… it’s got an SPF 30 to keep skin protected from both UVA and B, while antioxidants create a ‘force field’ between face and the ageing effects of the elements (horrible things like pollution and smoke and other atmospheric wretchedness). Flavonoids and polyphenols collaborate to brighten dark spots and restore uniformity, while mallow flower extracts help maintain moisture levels so that skin feels ‘plump’ and dewy. The coverage is sheer but buildable – skin looks like your-skin-but-better – and I defy anyone to realise you’re wearing make up (you’re likely to forget, until you glimpse yourself somewhere and remember what a ‘great face day’ you’re having).

All told, this miracle is the ultimate year-round skin perfector, and because of its chameleonic cleverness, it will tide you neatly through tanned-and-back, saving you money and quandary. I’ll CC you at the checkout… (yes?).

THE INKEY LIST is our Cult Brand of the Month!

Is Sugar Ageing Your Skin?

Calling all red lipstick-phobics: here’s a…