If New York is home to luxe yet wearable fashion, London never fails to offer a spectrum of trends from the utterly weird to the thoroughly wonderful. With Meadham Kirchhoff, Sophia Webster and Vivienne Westwood typifying the zany London style we know and love (My Little Pony, Helmut Lang and Jean Cocteau were cited amongst their diverse inspirations) – at Giles, Erdem and Christopher Kane, models were pale skinned and 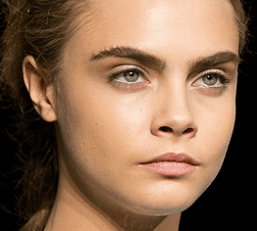 disheveled in a cool Courtney Love-meets-Wednesday Addams kind of way; chic without looking too polished.

Eyebrows showed no sign of slinking back into obscurity with bold-browed Cara Delevingne continuing to dominate fashion month – her brows preceding her down virtually every LFW catwalk worth mentioning. At Mathew Williamson, Sass & Bide, Clements Ribiero, Holly Fulton and Mulberry, brows were filled in and backcombed to unexpectedly sexy effect.

>> Anastasia Beverly Hills have everything for creating beautifully sculpted brows. First add definition using Brow Pen (opt for a shade slightly darker than your brows for added drama) then use Clear Brow Gel to brush and set hairs in the opposite direction of growth. 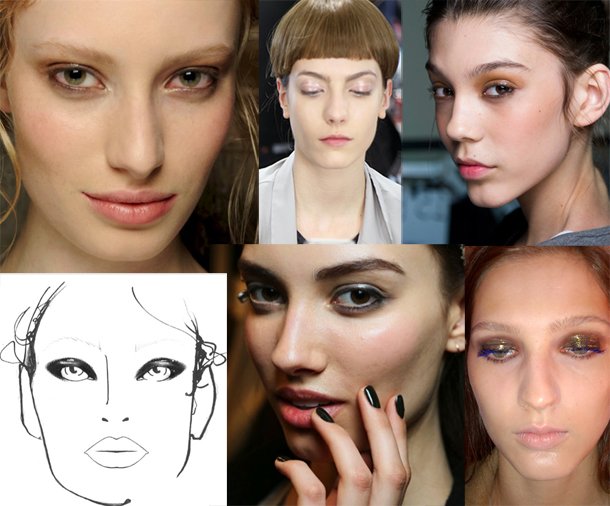 High shine eyelids were a recurring theme; spotted at shows as diverse as Sass & Bide and DAKS, where Elizabeth Arden’s Eight Hour Cream was smudged over eyelids and paired with a just-bitten lip. At Moschino Cheap & Chic, black shadow was given a PVC finish and at Antipodium, glittery gloss was smudged over a charcoal base for a modern, lacquered take on the traditional smoky eye.

>> Keep mascara to a minimum and instead, smudge eye pencil along the lash line (try Eyeko’s Skinny Liner in ‘Dove Grey’), before coating lids with balm or gloss for a shimmering wash of colour. Alternatively, mix FACE Stockholm’s Eye Dust in ‘Beauty’ with Pommade Divine, to mimic the pearlescent finish as seen at Mary Katrantzou. 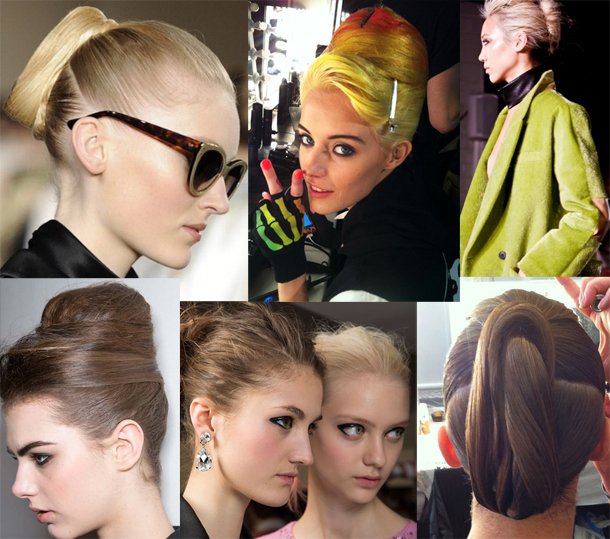 The ladylike hair trend we saw emerge during NYFW, spilled over to London; hair at PPQ, Moschino Cheap & Chic, Antipodium and Temperley was pulled back into chignons, then either lacquered or teased out; the models at Moschino Cheap & Chic looked like their styles had been slept in and hair had a matte, messy texture that softened the otherwise ‘grown up’ up-do.

>> Try Sachajuan’s Spray Wax to mattify hair and give it a bed-head appearance, before piling into a deconstructed bee-hive, or twisting into a loose bun or chignon. 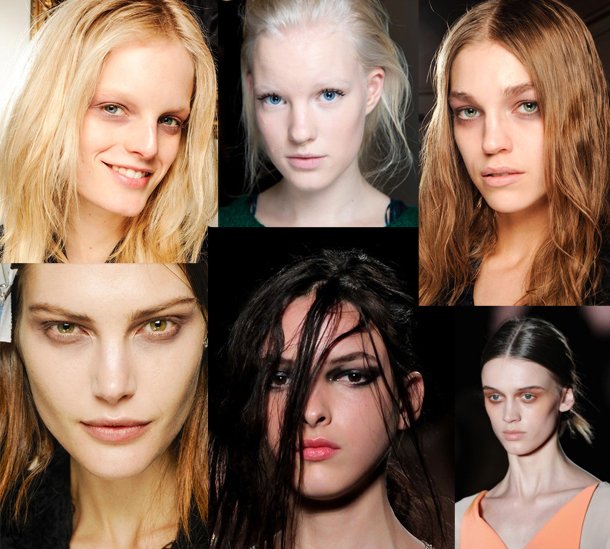 Grunge is back with a vengeance, but this time around it’s a lot more polished. The grunge girls at shows such as Todd Lynn, Giles and John Rochas looked like they’d all opt for cashmere with their nose rings, and sported eye shadow in neutral shades of mushroom, taupe and bronze with either lashings of mascara (five coats at Todd Lynn) or no mascara at all. Wednesday Addams was the muse at Giles, where hair was worn ultra-long and centre parted – plaited then undone to achieve a crinkled look that was recognisably grunge without being too nineties.

>> Channel the look at Roksanda Ilincic by brushing ELLIS FAAS Creamy Eyes in ‘Beige’ liberally over upper and lower eyelids, then softening with fingertips for a nonchalant, lived in eye make-up look. 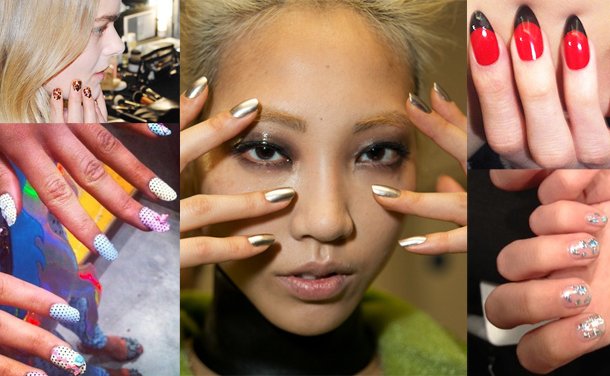 When it came to nails, the rule was, there were no rules… except DO THEM! Holographic at Ashish, tortoiseshell at House of Holland, metallic at Antipodium and candy-coloured at Sophia Webster, nails were mini canvases on which the artists worked their magic. At Holly Fulton, nails were sharpened to a point then painted pillar-box red with a black tip to complement the striking black and red make-up look, while the tortoiseshell effect at HoH was created by nail expert Sophy Robson, who literally splodged shades of orange, yellow and chocolate brown onto nails, before ‘squashing’ with her finger and sealing with an ultra high-shine top coat.

What is double cleansing?

These make up multi-taskers will become your handbag heroes

Get the Look with Tela Hair Organics

Back to School with a Tan

Coming soon: Then I Met You

Revolutionise your skin in 31 days